2020 is on course to be the warmest year on record 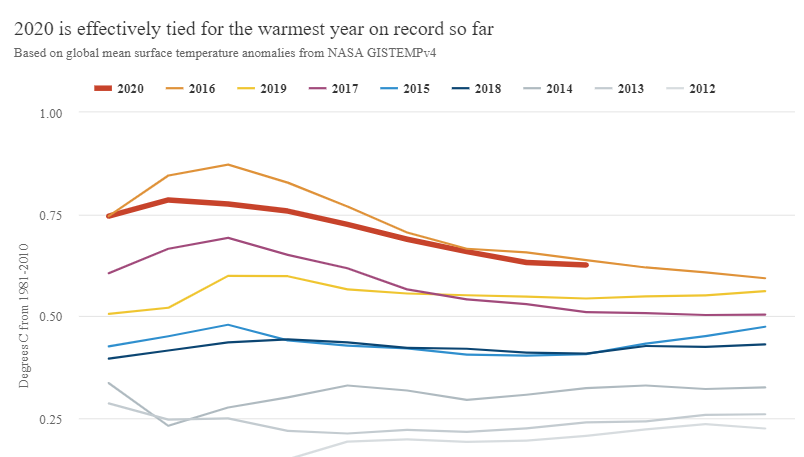 2020 is on course to be the warmest year on record

-2020 is set to be the warmest year on record, according to data from different sources, including NASA.

-This is even more remarkable despite it not being an El Niño extreme weather event year.

-The first nine months of the year saw record concentrations of major greenhouse gases like CO2, methane, and nitrous oxide.

-Arctic sea ice extent was also at record low levels for much of the summer.'

While this year will be memorable for many reasons, it is now more likely than not that 2020 will also be the warmest year for the Earth’s surface since reliable records began in the mid-1800s.

This is all the more remarkable because it will lack any major El Niño event – a factor that has contributed to most prior record warm years.

However, with three months remaining, there is still some uncertainty. There is a chance that a growing La Niña in the tropical Pacific may drive cooler temperatures leading to a second-place finish – at least in some of the global temperature records produced by different groups of researchers around the world.

The first nine months of the year saw record concentrations of major greenhouse gases – CO2, methane, and nitrous oxide – in the atmosphere. Arctic sea ice extent was at record low levels for much of the summer and the summer minimum clocked in as the second lowest on record after 2012.