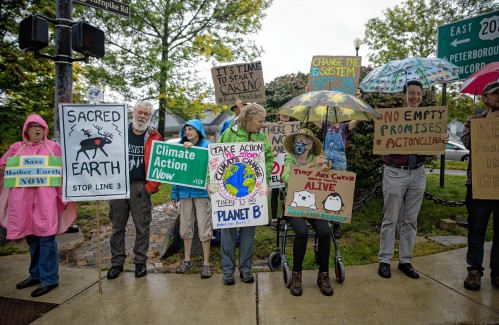 Climate strikes in Concord and around the state on Friday pushed for more aggressive state and federal action on climate change, as a part of a series of coordinated actions happening throughout the state and world.

A youth-led group called Fridays for Future reported over 300 strikes in North America and nearly 1,000 in Europe. Six strikes were organized in New Hampshire, including Concord, North Conway, Portsmouth, Durham, Nashua, and Jaffrey.

Youth leaders in New Hampshire criticized the state for its inaction in addressing climate change and called for the closure of the coal-fired Merrimack Station in Bow. They also pushed for more wind power to meet New Hampshire’s energy needs. The plant in Bow does not run consistently but is part of what’s called the capacity market, meaning that it’s used when energy demand is especially high and can’t be met with other sources of energy.

Speakers at the strike pointed to the congressional budget reconciliation process as one avenue for making meaningful change. The reconciliation bill would provide funding for renewable energy and climate resiliency investments, although it was stripped of language that would end subsidies for fossil fuels. Activists also said they wanted the state to commit to a plan for reaching net-zero carbon emissions within a meaningful timeframe.

Seventeen-year-old climate activist Lilly Tague-Bleau from Manchester said the burden of addressing climate change should be on corporations that are contributing the most to carbon emissions. Tague-Bleau sees that kind of change happening only through legislation.

Tague-Bleau said she was there to “hold them accountable.”